STG 44 From Hill and Mac Gunworks

In all fairness, it looks like there are brackets on the receiver for a dust cover and there also appears to be a divot in the receiver for the detent on the cover door. Maybe those bits weren't ready for prime time by the time of the show?
W

Just presented at this year Shotshow

I know that we are just bouncing rubble with the Shot Show information at this point but here is a nice short video with basically all the talking points Mac has been sharing. Plus, you don't have to suffer through some internet "personality" interviewer getting in the way.

Combloc said:
In all fairness, it looks like there are brackets on the receiver for a dust cover and there also appears to be a divot in the receiver for the detent on the cover door. Maybe those bits weren't ready for prime time by the time of the show?
Click to expand...

Good points. If they add the dust cover I will consider buying one.

200 trigger pack components in an original???? GROSS overstatement to the point of outright lie.

NOTHING about this dude gives me confidence. He has an air of carnival barker about him.

200 trigger pack components in an original???? GROSS overstatement to the point of outright lie.

NOTHING about this dude gives me confidence. He has an air of carnival barker about him.
Click to expand...

You know you want one or you wouldn't keep coming back to this thread. Give it a year and you will be doing an in-depth review of a PSA StG44.

Palmetto claims this is the first of a Battlefield series. They named dropped the Luger, MP40, and Sten. I think we all should start an email campaign for the M3 Grease gun!

This is a video from six years ago but it is the same rifle. Lot's of in-depth details if you are interested in the technical side. This rifle has a ton of interchangeable parts with the original. I have been tracking this thing from the beginning. I believe it is close enough for the collector and modern enough to be a good shooter.

That looks really cool!
B

Hummmmm didn't PSA say the mp5 clone they showed at shot show years back be available that same year ???

This is a good point and probably a question that many people have. I'd like to share some of my experience. It is not my intent to sell anyone on this gun and I do not have any ties to MHG or PSA other than a borderline obsession with the project.

I agree, Palmetto has been slow going with some of their firearms releases. Although I am a big fan of PSA, this is not in any way a PSA rifle, other than they will be making it from this point onward. I have been following this project for 5 to 6 years, way back when Hill and Mac Gunworks first started it. I have read every update and watched every video that I could find. I have spend literal years watching this thing develop and evolve. I watched discussions about what metal to use, the tooling, and the changing of injection port locations in the magazine molds. Unless Mac lied to my face, I have held a production (not prototype) rifle in my own two hands. Trust me when I say, this rifle was not created for Palmetto's Battlefield line, PSA's Battlefield concept was created due to this rifle already existed.

There is no guarantee that these rifles are perfect and unless the gun has been around as long as the AR15, congratulations! Welcome to the R&D department, just like any company's new offerings. Honestly, there might be some growing pains once the StG44 gets into the wild. Getting moved from HMG to PSA and all set up might take some time, but the tooling and equipment that PSA will be using has been complete for years. From what I have seen, HMG has done their homework and I have no reservations buying one right off the front of the line. Plus, PSA is strong and a well developed business. They are more than capable of handling any warranty work for years to come.

As a little side story. During testing, HMG took a rifle and strapped it into a custom made fixture that repeatedly cycled the bolt and pull the trigger. This was used to look for wear or anything abnormal. They would turn it on and it would run for hours. Because this contraption operated the firearm in a repeated manner with a single throw of an electrical switch, the whole thing was registered as a machinegun.

Here are some pictures that I have gathered over the years showing some more detail. 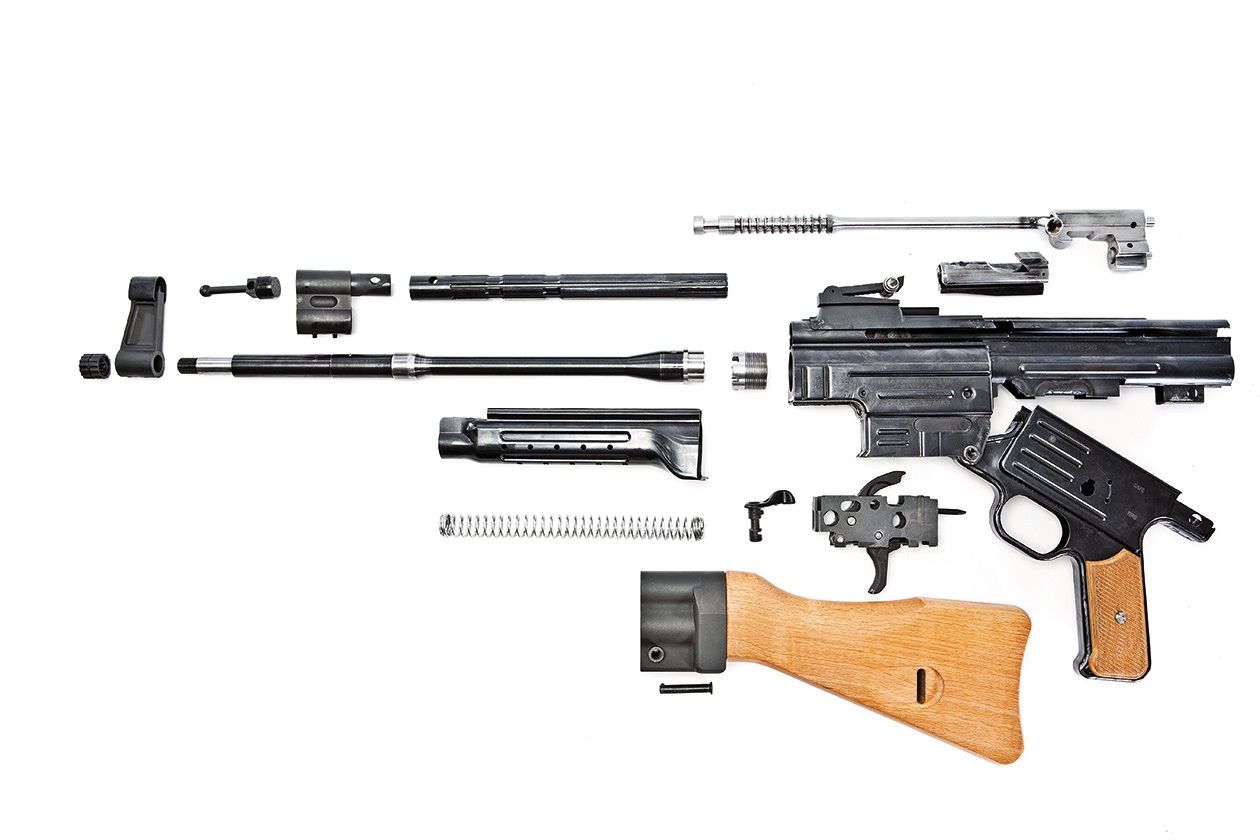 HMG originally offered the StG in a rifle, SBR, and a pistol format in every caliber. 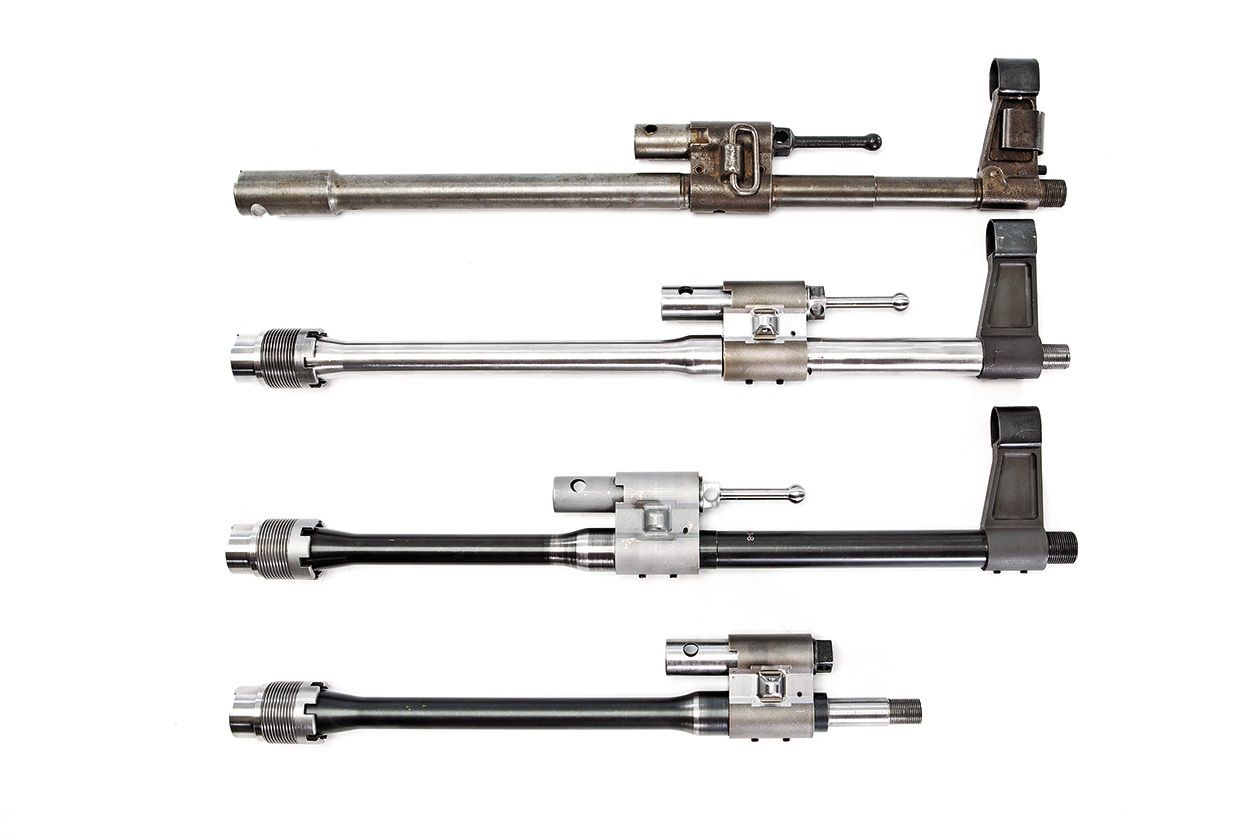 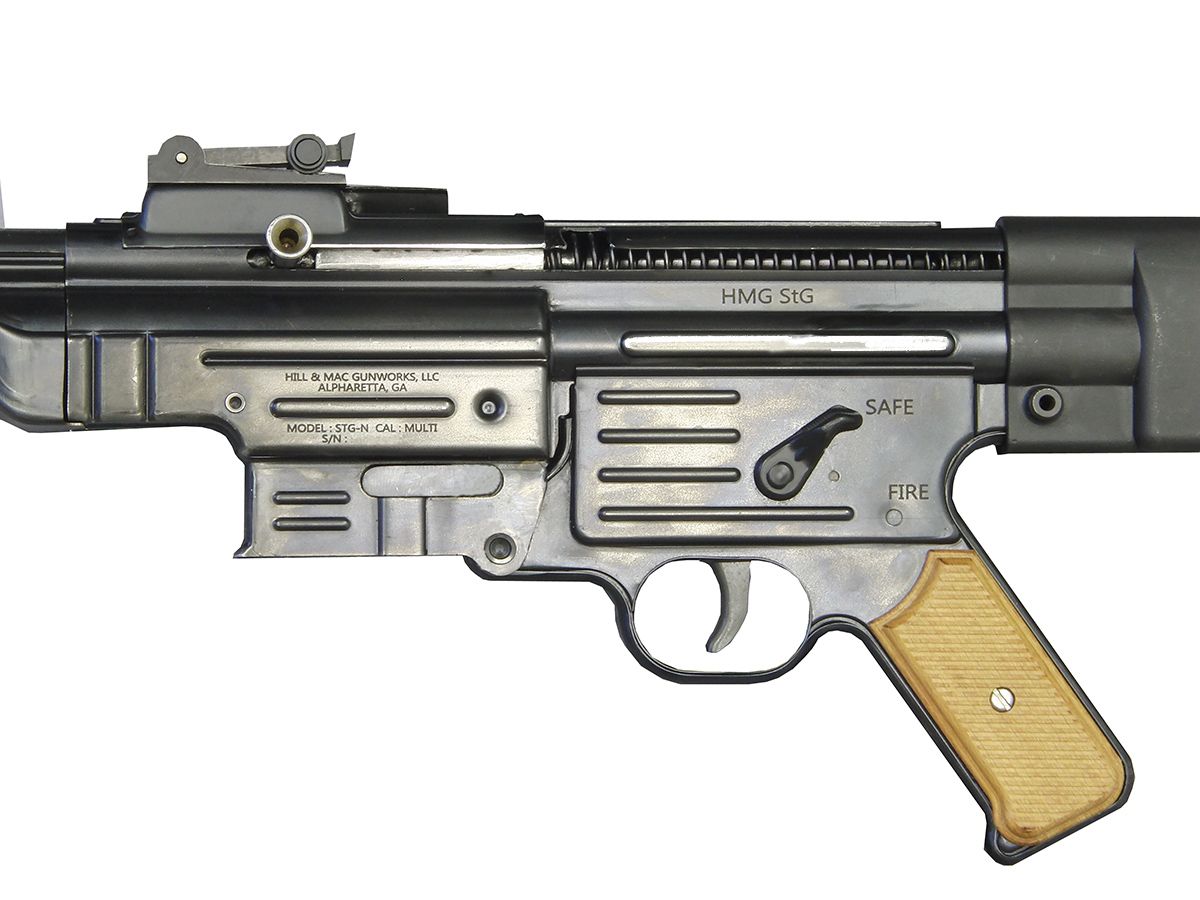 The main recoil spring has been moved out of the buttstock and placed entirely in the upper receiver to allow for a rear cap in pistol configuration. This would also permit a folding stock on a rifle or SBR, if you should choose. 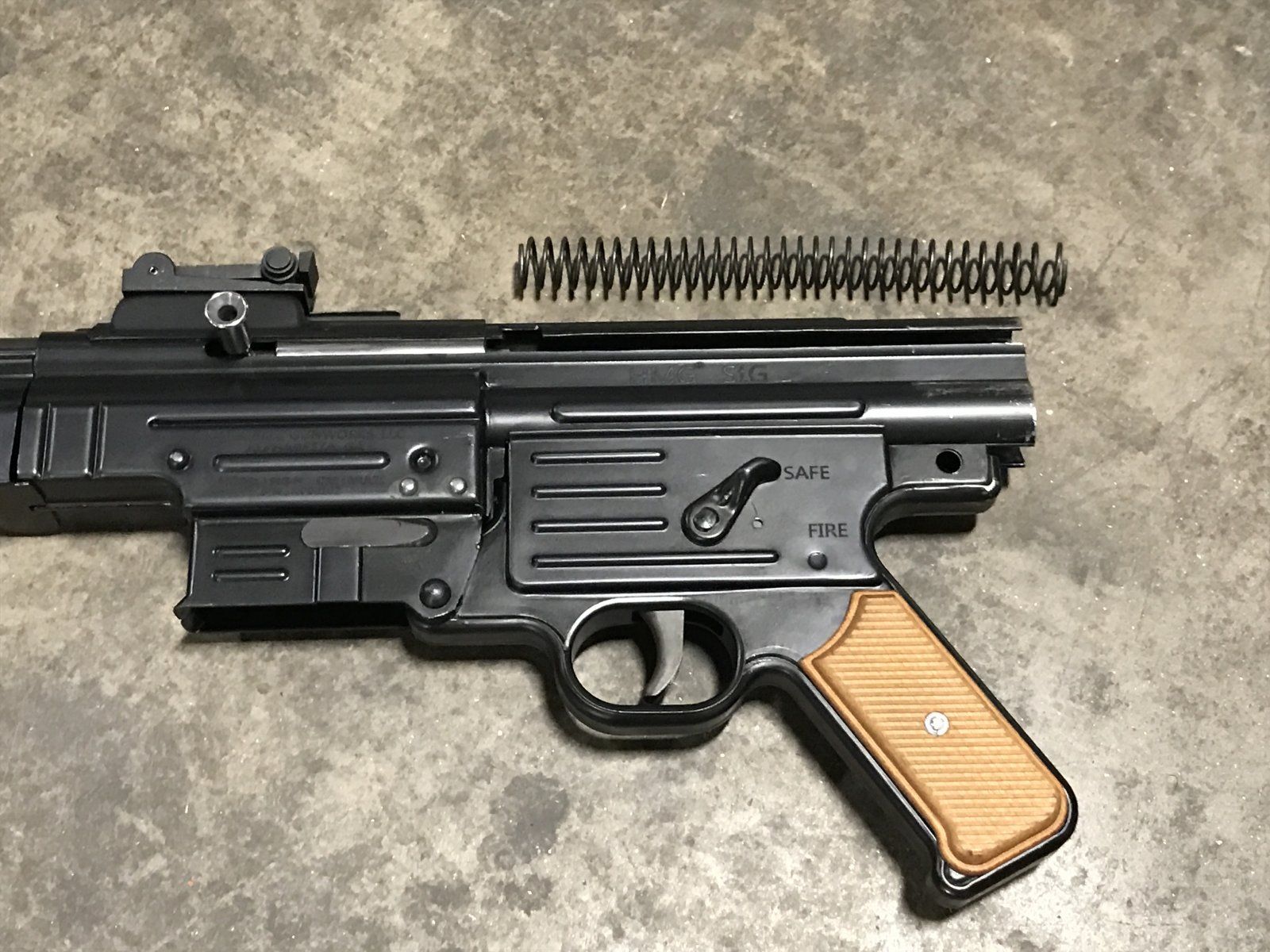 Cool pics.
* Looks like the handguard has to change length w/ the different calibers? The gas blocks are all in different locations. A caliber swap must include the matching handguard?
* Interesting it uses a HK trigger pack.

This is from the HMG website for pistols and SBRs. All the rifles should all have the same barrel length.
Picture is a HMG SBR.
Overall Length: Varies upon caliber: 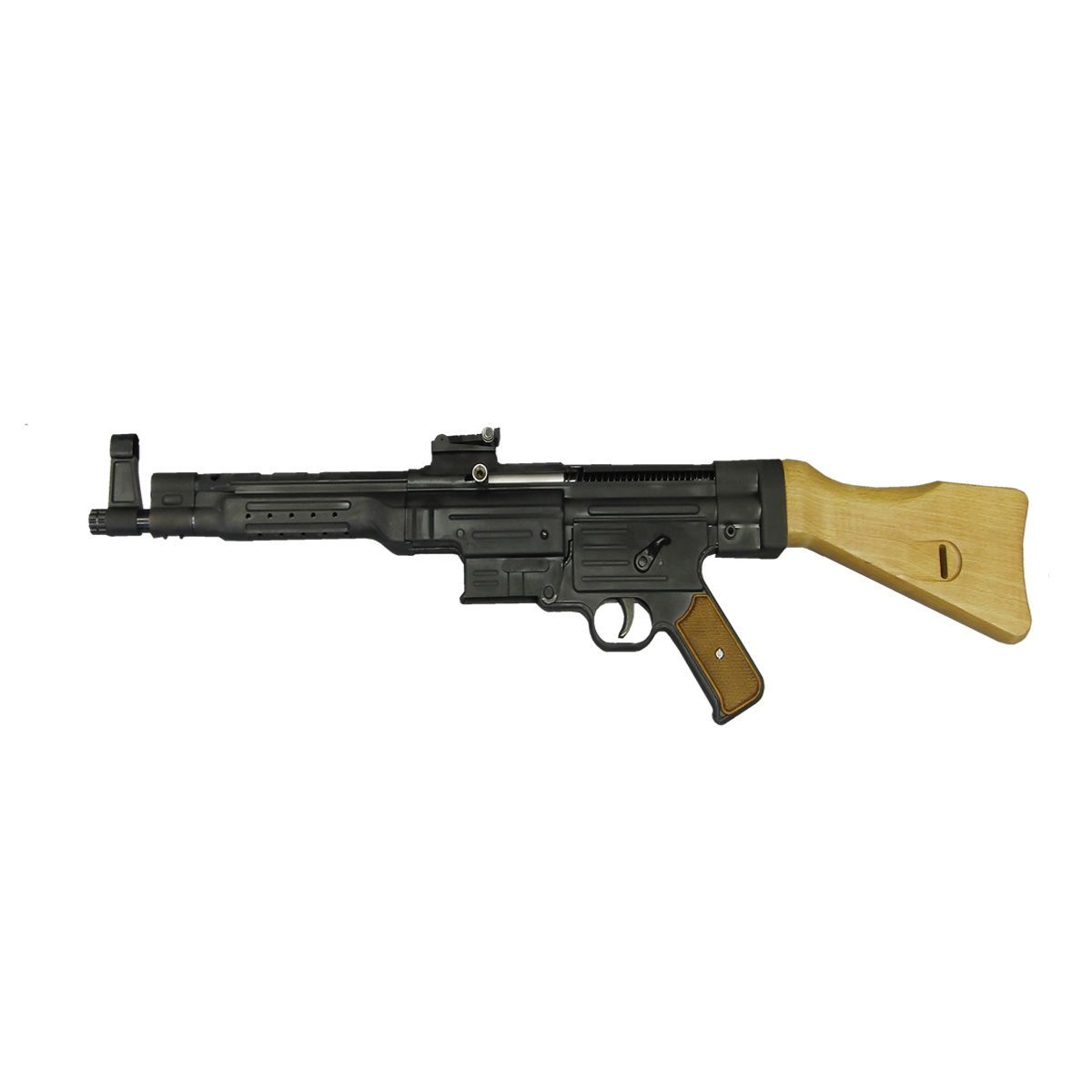 Last edited: Wednesday at 8:21 PM
You must log in or register to reply here.