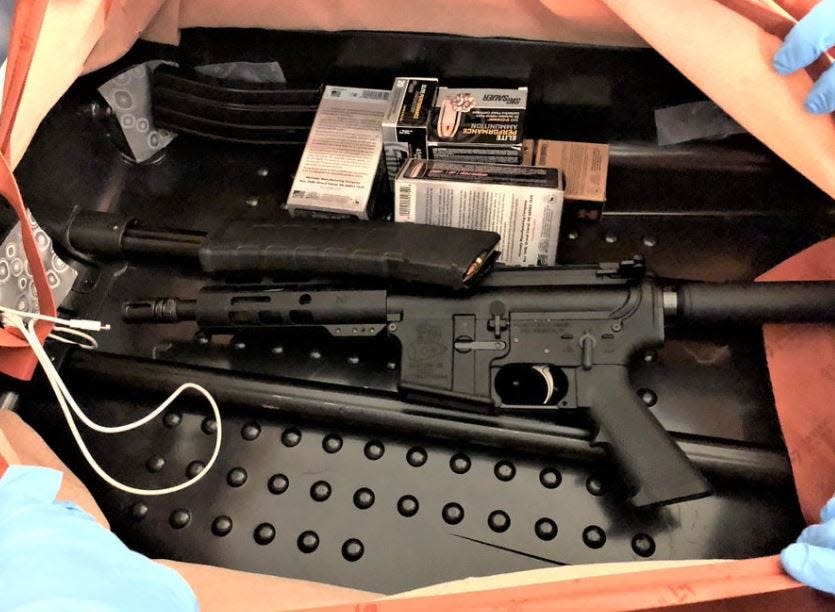 The suit says the NJ ban violates the precedent established by the Supreme Court in its ruling last month which overturned a New York gun law.

New Jersey's ban on assault rifles such as the AR-15 and AK-47 is unconstitutional and must be overturned immediately, according to a lawsuit filed Thursday in Camden federal court.

Brought by the Firearms Policy Coalition, a gun rights group, and two of its members, the lawsuit claims New Jersey's ban "unconstitutionally infringes upon Plaintiffs' fundamental, individual right to keep and bear arms."

The two members — Timothy Connolly of Ocean County and Mark Cheeseman of Gloucester County — claim they want AR-15s for "lawful purposes, especially home defense and target shooting,” according to the lawsuit. But they have refrained because they fear prosecution.

Their attorneys wrote that the ban violates the precedent established by the United States Supreme Court in its ruling last month, which overturned a New York law that placed strict limits on who could carry a firearm in public. The court said gun control laws must now be consistent with the nation’s historical traditions of firearms regulation.

“There’s no history of locking people in cages for peaceably owning common firearms,” Matthew Larosiere, the coalition's policy counsel, said Friday. “The type of arms targeted by New Jersey’s ban are both constitutionally protected and dearly needed by the people.”

The lawsuit represents one of the first big challenges to the Garden State’s restrictive gun laws following the controversial ruling. But the court’s 6-3 decision won’t only affect carry laws — it also changes the standard federal courts must use when evaluating new and existing gun control statutes.

Writing for the court’s conservative majority, Justice Clarence Thomas said gun laws must now be comparable to restrictions enacted throughout American history to be considered valid.

That wording will likely make it far easier to challenge existing gun laws, such as New Jersey’s assault weapons ban or its prohibition on high-capacity magazines. The high court has already declared lower courts must reconsider the latter, which made it illegal to possess magazines that hold more than 10 rounds.

It also declared lower courts must reconsider a similar ban on assault rifles in Maryland.

The Supreme Court’s decision — and its rippling effects — arrives as the nation reels from an explosion of gun violence and bloody mass shootings, including May massacres at a Buffalo supermarket that left 10 dead and at an elementary school in Uvalde, Texas that killed 19 children and two teachers.

But in a Friday opinion piece published by The Record and NorthJersey.com, Platkin said he was committed to using a “wide range of tools” to protect the state’s residents from gun violence.

“The opinion in [the New York case] will encourage individuals to challenge other laws, ranging from our limits on who can buy guns, to our limits on the most dangerous kinds of guns New Jersey residents can buy,” Platkin wrote. “I will stand up for these critical safety measures, which find support in a long tradition of public safety measures in this country, and which continue to protect us in this era of gun violence and mass shootings."

Cheeseman and Connolly are members of the Firearms Policy Coalition, a nonprofit that operates out of Nevada and focuses on gun rights.

In the lawsuit, the plaintiffs referred to the state’s assault weapons ban as an “expansive criminal regime” that illegally bars residents from owning a variety of semiautomatic, military-style rifles. Many of these, including the AR-15, have been used by gunmen in American’s worst mass shootings.

The lawsuit argued that AR-15s are an “optimal firearm to rely on in a self defense encounter.” The banned rifles are commonly used for hunting and sport, but rarely crime, it said.

“The rifles at issue in this case are the sorts of bearable arms in common use for lawful purposes that responsible and peaceable people across the United States possess by the millions,” the lawsuit said. “And they are, moreover, exactly what they would bring to service in militia duty, should such be necessary.”

This plus Bianchi should be fun.
D

And the one in Cali that I don’t think is quite as far along as the md case.

And the coming Delaware case. Which may not be filed yet, but will surely happen, especially with a good ruling on these other cases.

Any chance all these related threads can be fused into one?

rambling_one said:
Any chance all these related threads can be fused into one?
Click to expand...

50% chance some of these 2A cases get merged into one.
You must log in or register to reply here.