Judge Silberman Passes Away, Ruled for Heller in DC

I received a call from Dick Heller tonight about the passing last night of this courageous jurist.

“Judge Laurence Silberman of the U.S. Court of Appeals for the District of Columbia died Sunday night. Silberman was instrumental in affirming Second Amendment rights when he ruled in 2007 that D.C.’s complete ban on gun ownership was unconstitutional.

The city appealed his ruling to the Supreme Court, which then led to the landmark Heller decision on gun control. I called Dick Heller about the news.

"Judge Lawrence Silberman was a staunch defender of constitutional rights and was a visibly passionate defender of the Second Amendment in the courtroom — of which the Supreme Court took note,” he said.

Heller added that the High Court “applied Silberman's history and reasoning” in his 2008 case District of Columbia v. Heller, which he referred to as the “firearms freedom case.” 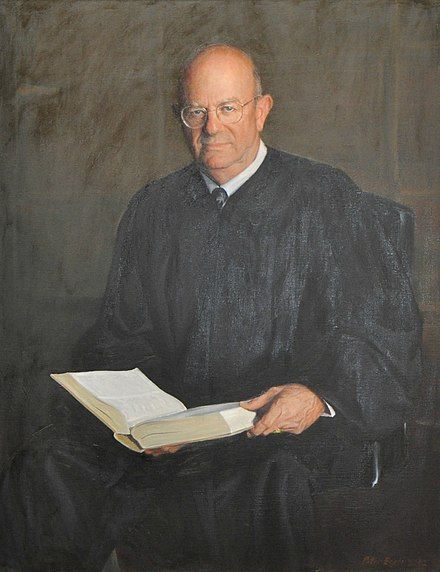 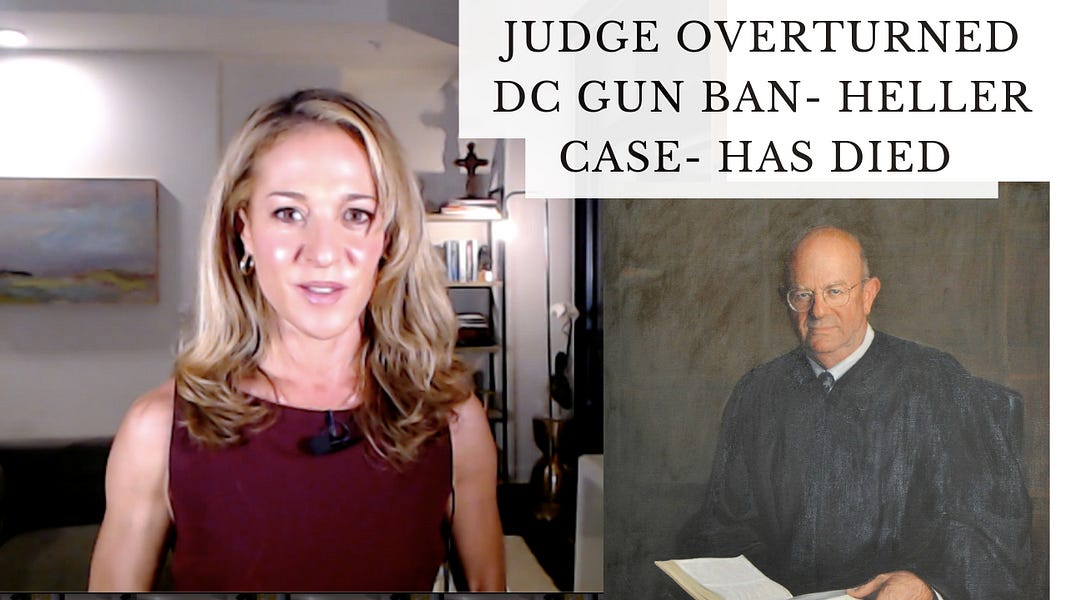 Second Amendment stalwart on U.S. Court of Appeals said the individual has the right to keep and bear arms. 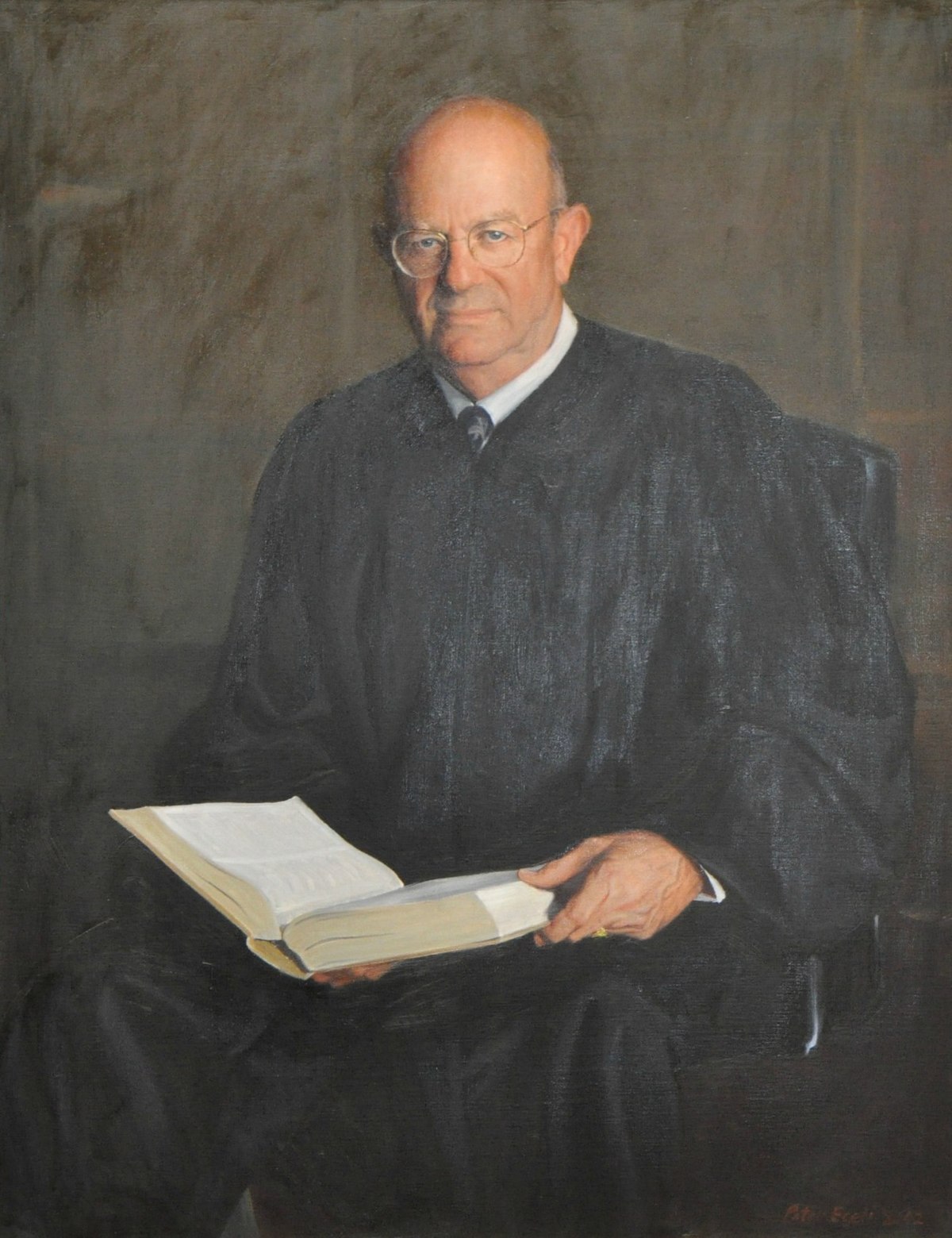 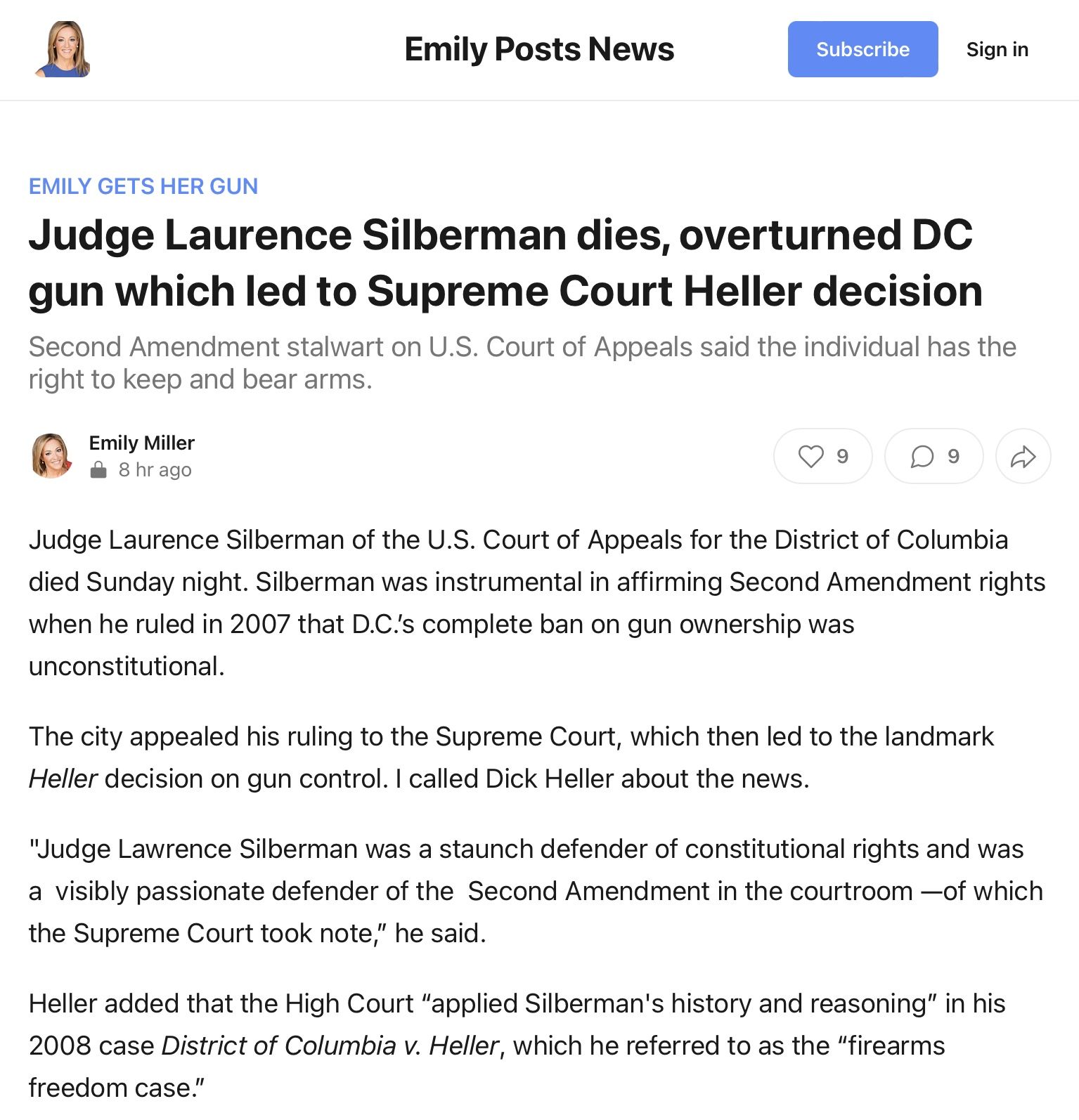 May he rest in peace.

By Josh Blackman
Judge Laurence Silberman of the D.C. Circuit Court of Appeals died on Sunday. The Wall Street Journal has full coverage, including an obituary, house editorial, and op-ed by Paul Clement. (Indeed, I suspected something was up when the WSJ published Judge Silberman's Constitution Day address at Dartmouth.) He was a legal giant. Few today could ever scale to his height and influence. Here, I will include a short anecdote about my experiences with Judge Silberman.

In November 2021, I wrote about an unusual judicial misconduct issue. Judge Silberman alleged that Judge Sullivan (D.D.C.) should not be able to sit on the District of Columbia's judicial selection committee. Silberman's complaint was grounded in the separation of powers, as well as the code of conduct. Eventually, my post came across Judge Silberman's radar. In April 2022, his law clerk contacted me, and said that the Judge would be happy to chat with me about the matter. By chance, I was scheduled to be in D.C., and asked if we could meet in person. Judge Silberman obliged.

My brief hour with Judge Silberman is a time I will never forget. He explained why he was motivated to bring this complaint. There was noting personal against Judge Sullivan. Rather, he did not want judges getting involved in the political process. Judge Sullivan told me that when President George W. Bush asked him to co-chair the commission on the intelligence failures leading up to the Iraq War, Silberman considered resigning from the bench. However, he learned that he could simply stop all judicial business while performing his role for the executive branch. And so he did. For a period, Judge Silberman did not decide any cases or participate in any court business. Silberman couldn't even use his judicial clerks and staff during that time. Silberman explained that if Judge Sullivan really wanted to serve on this judicial selection committee, he could put on hold all of his court business.

Judge Silberman was also bothered by the fact that Congress drafted a statute that required a federal judge to serve on this commission. Now, that problem could be mitigated by having a senior judge who no longer hears cases to serve in that role. But in Silberman's view, it was troubling that Congress seemed to approve a clear violation of the Code of Conduct. And the various apparatchiks within the Judicial Conference seemed to defer to Congress's finding that this practice was valid. Silberman asserted that Congress could not deem unethical conduct as ethical. And he worried about what kind of precedent that could set. I asked him to spell out his thinking a bit more, because I didn't see the slippery slope here. He looked pensive, and said he would think about it. (More on this argument later.)

Then, Judge Silberman took me down a tour of memory lane. He talked about his work on In Re Sealed Case, which became Morrison v. Olson. Justice Scalia's famous dissent largely tracked Silberman's lead. He reminded me that he was the person who began the litigation that challenged Congress's denial of cost-of-living adjustments for federal judges. After he prevailed in that case, Judge Silberman emailed every federal judge in the country to let them know. There was no massive mailing list. His secretary simply compiled every individual address. Of course, Silberman decided Parker v. D.C., which became Heller. And he wrote the principled decision in Seven-Sky v. Holder, which upheld the Affordable Care Act as a valid exercise Congress's commerce powers. (Like Bruno, we do not talk about Justice Kavanaugh's "dissent" in that case.) I agree with WSJ that Silberman was more consequential than most Supreme Court justices.

Silberman told me some great stories about his time in the executive branch. One story stuck out, which he recounted in a 2012 Green Bag essay:

The group approved our proposal and Ehrlichman arranged a meeting with the President. That session in early 1970, according to one of the participants, was one of a very few meetings, perhaps the only one, the President had with an interdepartmental working group to discuss a domestic policy issue. As the accompanying picture shows, I am presenting the proposal to the President with the rest of the working group, as well as Ehrlichman and his deputy, Ken Cole, sitting around the table in the Cabinet Room. You will note that sitting next to the President is a white-haired older gentleman. It was apparent from the discussions that he was an ex-Congressman who had served with Nixon in the House when Taft-Hartley was passed in 1947. The President, after rather careful probing, enthusiastically endorsed the initiative. As I was walking out of the room, I asked Ed Morgan, one of Ehrlichman's assistants, "Who was the white-haired gentleman sitting on the President's side of the table?" Morgan replied, "George MacKinnon." I was taken aback: "You don't mean Judge MacKinnon." Morgan said, "Yes," at which point I pointed out that it was quite inappropriate to have a federal judge sitting in on a White House policy discussion. Morgan asked why, and I explained the judicial canon. I reminded him of what Abe Fortas had done during the prior administration and the ensuing brouhaha when he was nominated as Chief Justice. Late that day or the next, Morgan called me to say that it would never happen again, but he sent me the picture.
Click to expand... 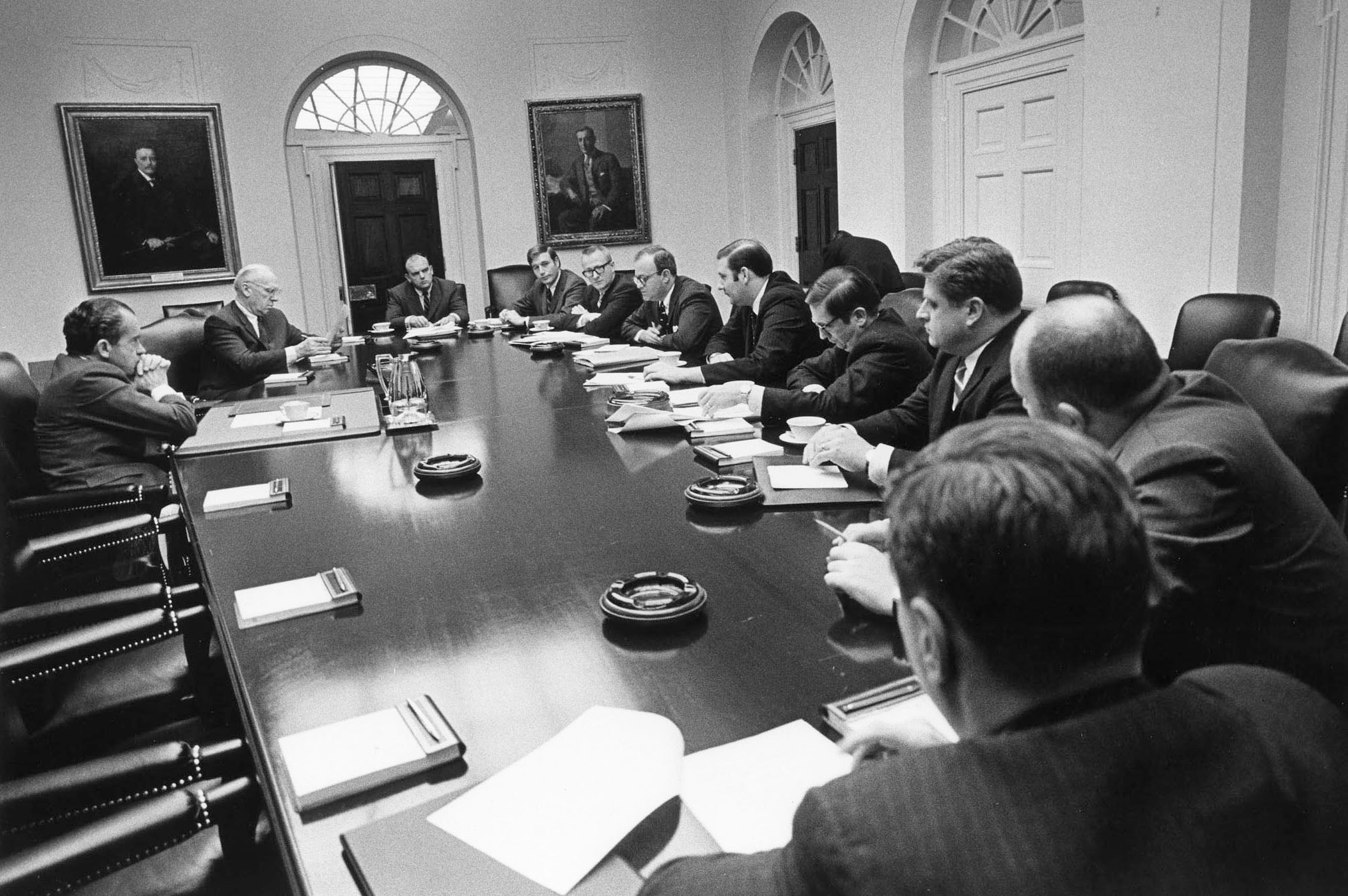 Clockwise from left: Richard Nixon, George MacKinnon, John Ehrlichman,
Mike Moscow, Tenley Johnson, Laurence Silberman, Ed Morgan, Jim Lynn,
William Gifford (legislative assistant to George Shultz), Richard Cook (White
House legislative aide), and Ken Cole.
Judge Silberman mentioned a tidbit that did not make it into the Green Bag. Apparently Judge MacKinnon said that he would have recused from any case involving the new legislation, so there was no problem. No harm, no foul, right? Judge Silberman vigorously disagreed. Judges should not get involved with politics, even if there is some way to rationalize it.

Eventually, my session wrapped up with Judge Silberman. I told him I would likely write more his complaint. (I did; he emailed me right away to point out some typos.) I then left Judge Silberman's chambers, and went to visit another judge in the building. About five minutes later, Judge Silberman barreled into chambers. The judge I was visiting thought Silberman was there to see him. No, Silberman was there to see me! Silberman said that he had figured out the slippery slope issue. If Congress could deem unethical conduct as ethical, then Congress could also deem ethical conduct as unethical. In other words, if Congress intervenes, even slightly, to give its imprimatur to dubious judicial behavior, then Congress could intervene to prohibit otherwise proper judicial behavior. He was exactly right.

What struck me was that a man of 86 years, a legend, thought enough to answer my question right away, and storm into another judicial chamber to tell me. I was in awe of how much care and attention he gave to this matter. But this is how Judge Silberman approached every facet of his life.

A few months later, I invited Judge Silberman to moderate a panel at the Federalist Society National Lawyers Convention. The theme was judges picking other judges. He immediately agreed. I regret that he will not be able to share his wisdom with us, one last time. Our panel will now be in his memory, which will be a blessing.

Anecdote about Judge Silberman. I retired from the US Court of Appeals for the DC Circuit many years ago when Judge Silberman was still active. I worked on the administrative side of things so I interacted with all the judges frequently. I was working one Saturday (which Silberman knew I did a regular basis) when he called me about a "cockroach" in his bathroom. His comment to me was "Do something about this cockroach in my bathroom! It's big enough to put a saddle on!"

The cockroach was dispatched and the court returned to normal.
He was definitely cut from the same mold as Scalia, Thomas and Cavanaugh, all of whom came from that court.
You must log in or register to reply here. 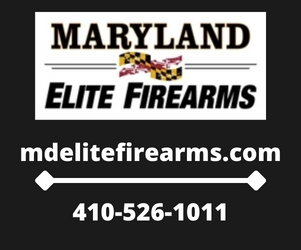