Recently picked up a collection that had been rather neglected, and among were these 2 Civ War carbines; a Burnside 5th Model and a Gallager. Both were covered in a right film of rust (Before all the "bUt ThE vAlUe!!!" folks chime in; it's not patina folks...it's rust, and we DON'T reward poor storage of guns and preserve rust, we preserve original finish) from sitting on the wall at a waterside property for twice as long as I've been alive. I spent a good few hours getting the actual original finish and actual patina to come back to the guns, and they are no longer rusty in the least. Bores are both well acceptable bright bores with some mild pitting (Gallager has more than the Burnside), but strong rifling remains and are perfectly shootable. Nipples never even fought me on the way out, and no seized-up screws, either. I guess I got lucky not having to fight them...and they came out looking really really good. Both guns are missing some parts, which are in transit via shipping, and by next week or so should be fully up and running and ready to roar, once more.

I'll repeat it again and stand by this statement until the day I die. Active rust is not "patina" on a gun the same way it's not desirable finish on a classic car. Mark Novak always says on his videos; "DO THE MAINTENANCE", and if done right; these guns will last many more generations.

I'll be updating this thread as they're conserved, and eventually when they hit the range to sing once again.

Nice pieces of history. Hope you post the “after” pictures when completed.

Nice to see some gunsome stuff on a gun forum.
Enjoy your hardware.
Somebody has to save the good ones.

Mightydog said:
Nice pieces of history. Hope you post the “after” pictures when completed.
Click to expand...

I actually forgot to take "Before" pictures of the condition of the metal on both guns; as I hate to see nice guns in neglect haha.

Let's just say it was sad...I wasn't even sure what was under the decay...and now they both look fantastic with their original finish showing proud and operate smoother than butter. It's like those Martini and etc rifles from Nepal covered in 100+ years of rust and garbage that turn out to be actual beautiful guns under all that junk. You never know until you take a chance and work 'em.

I'll look forward to seeing pictures of those guns.

Well, the missing parts are in...next is assembly and by Friday these should be MOSTLY ready to shoot. I have some small stock repairs to do, still.... 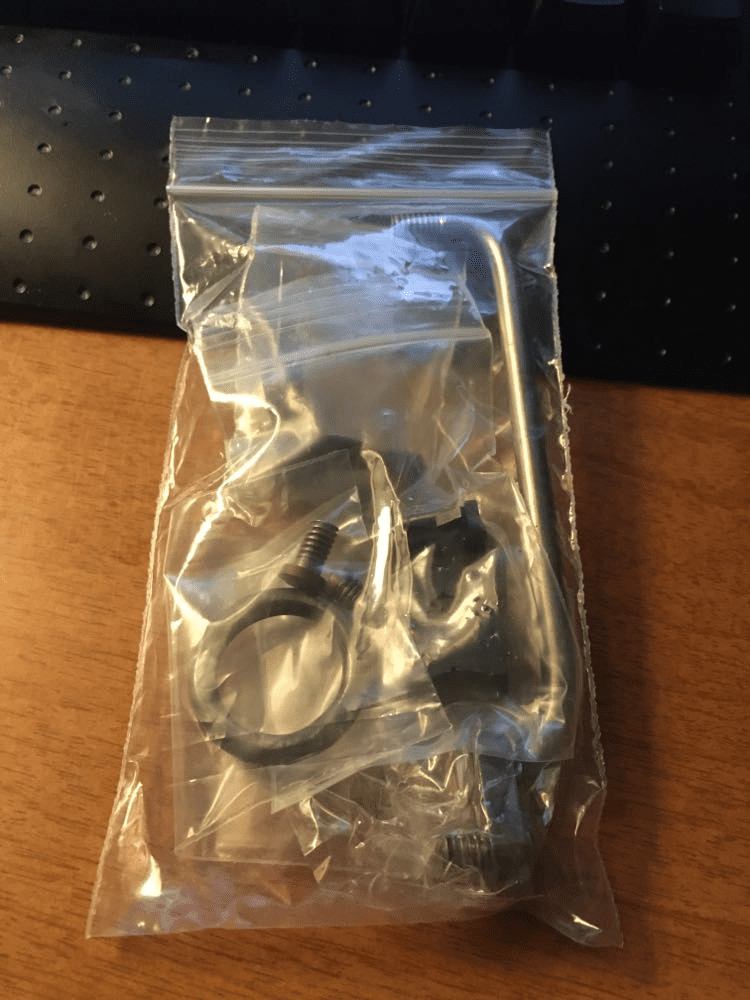 cool, how did you pull the rust off?
I recovered an old Swiss Veterli, But all I had to do was cover in Kroil and come back and wipe down every few days. Early on, I lightly stroked it with fine frontier stainless coil pads. Took almost 2 months to get the rust film off it. Bore was frosty/rusty.

Melnic said:
cool, how did you pull the rust off?
Click to expand...

Bronze brushes and oil for the crevices, and 000 and 0000 steel wool with a hefty oil coating and rubbing the bejeezus out of it. 90% of the time 0000 is plenty on most of them, and it never damages the actual finish being so fine; 000 for the tougher spots. It took hours and my arms felt like I did a ton of pushups...but hey, burning calories and preserving guns is a combo win.

Parts went in tonight. I had to hand fit the saddle bar and lever pin on the Burnside. Next is to blue the parts that were in the white, and final fix is the stock repairs. Pics to follow.
H

Those look fantastic. Thanks for sharing!

Burnside stock repair whilst curing. Yeah, it's a little ghetto....but this was a minor repair and didn't need anything special. I'm also currently out of surgical tubing, so tensioned rubber bands worked in a pinch. Trust me...you can't even see the repair; it came out great. It's almost back to good...stay tuned. Bluing is next. I probably won't be able to perfectly match the in the white parts to the original aged "browning" with a cold blue method...but I can at least make it look aged. 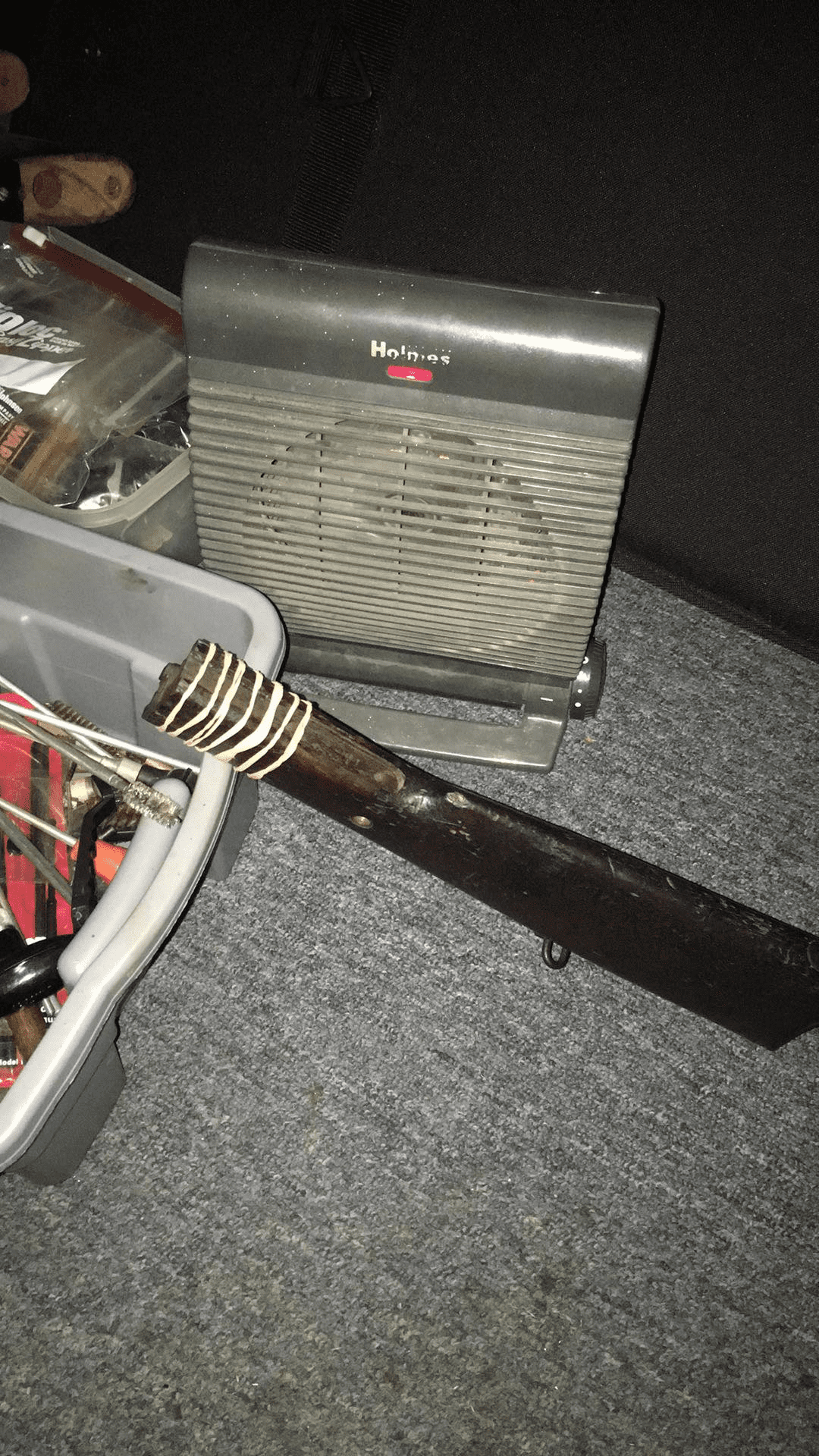 Stock repaired on the Burnside and all that's left is blue and a part I overlooked and can't seem to source...an escutcheon for the forend for the screw to catch on. Bit of a pain...figured I hit all the stops on this one, but fell 1 part short.

Gallager is missing the bolster screw, same story....can't source it and might have to have one made. Otherwise, the Gallager is totally done as far as I'm taking it!

The Burnside is 100% finished and ready to hit the range. For the first time in who knows how many years, this carbine will get to finally roar once more. Loaded up 10 rounds tonight...field-expedient reloads being easy after these 10 are fired. Brass cases with a 50gr charge of APP 2Fg (fills it to the line) and a .562 round ball pressed in and dipped in a traditional bullet lube. Ought to be at least a solid 50yd recipe, will report tomorrow with some follow-up on that...

Looking forward to seeing your shooting report. Such a cool gun. You had it close to being ready I think the last time I was in your shop.

I like the plastic cases from Lodge Wood Mine shoots pretty good at 50 yards 100 yards. I use Moose Mould bullet 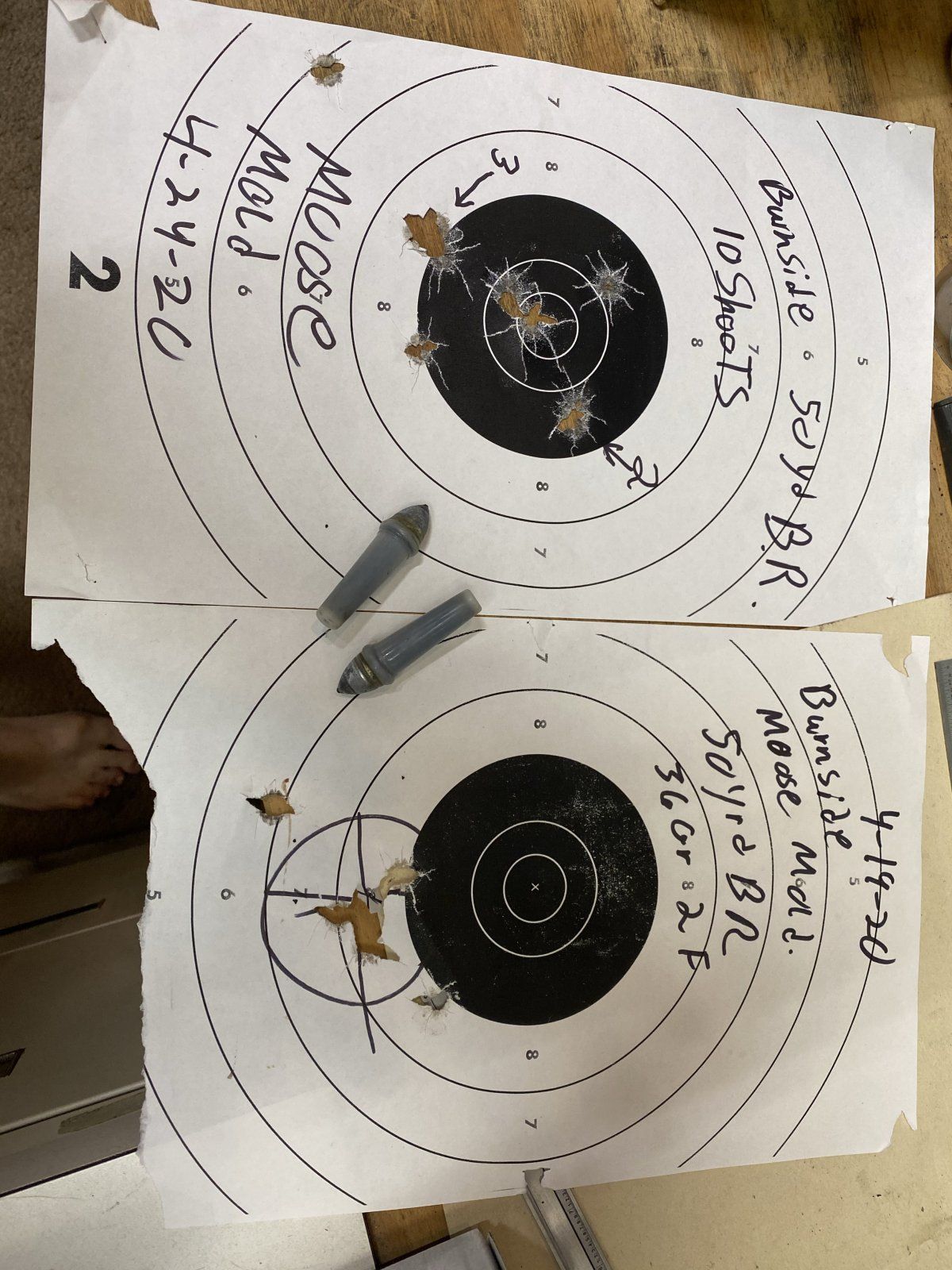 Here's a rough of the group over 25 shots at 50 yards. It wasn't the best group, but it was 100 degrees out on Thursday and we had no idea where to start haha. You can see we gradually brought it down and were landing them on target will relative consistency by the end. It's good enough to me, with load refinement I could really tighten it up, I'm sure. For a basic first try with no load development, this was good enough for me to be happy. 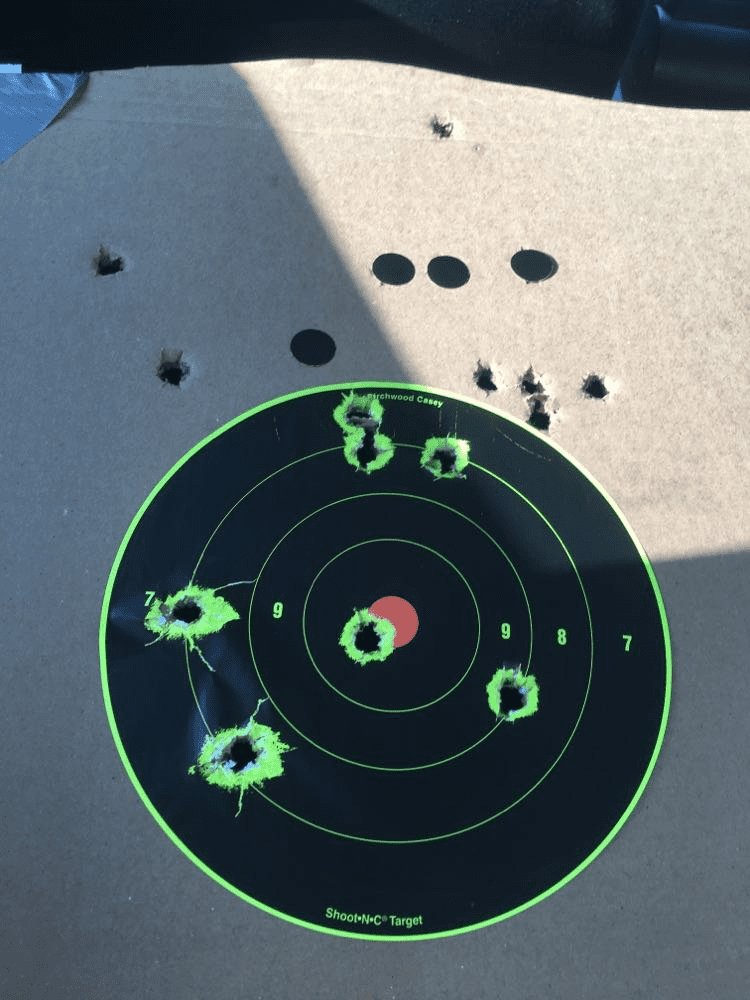 The Saint said:
Here's a rough of the group over 25 shots at 50 yards. It wasn't the best group, but it was 100 degrees out on Thursday and we had no idea where to start haha. You can see we gradually brought it down and were landing them on target will relative consistency by the end. It's good enough to me, with load refinement I could really tighten it up, I'm sure. For a basic first try with no load development, this was good enough for me to be happy.

Gallager is next...just need to slug the bore and determine the diameter to load into the brass (which I already have).
You must log in or register to reply here.